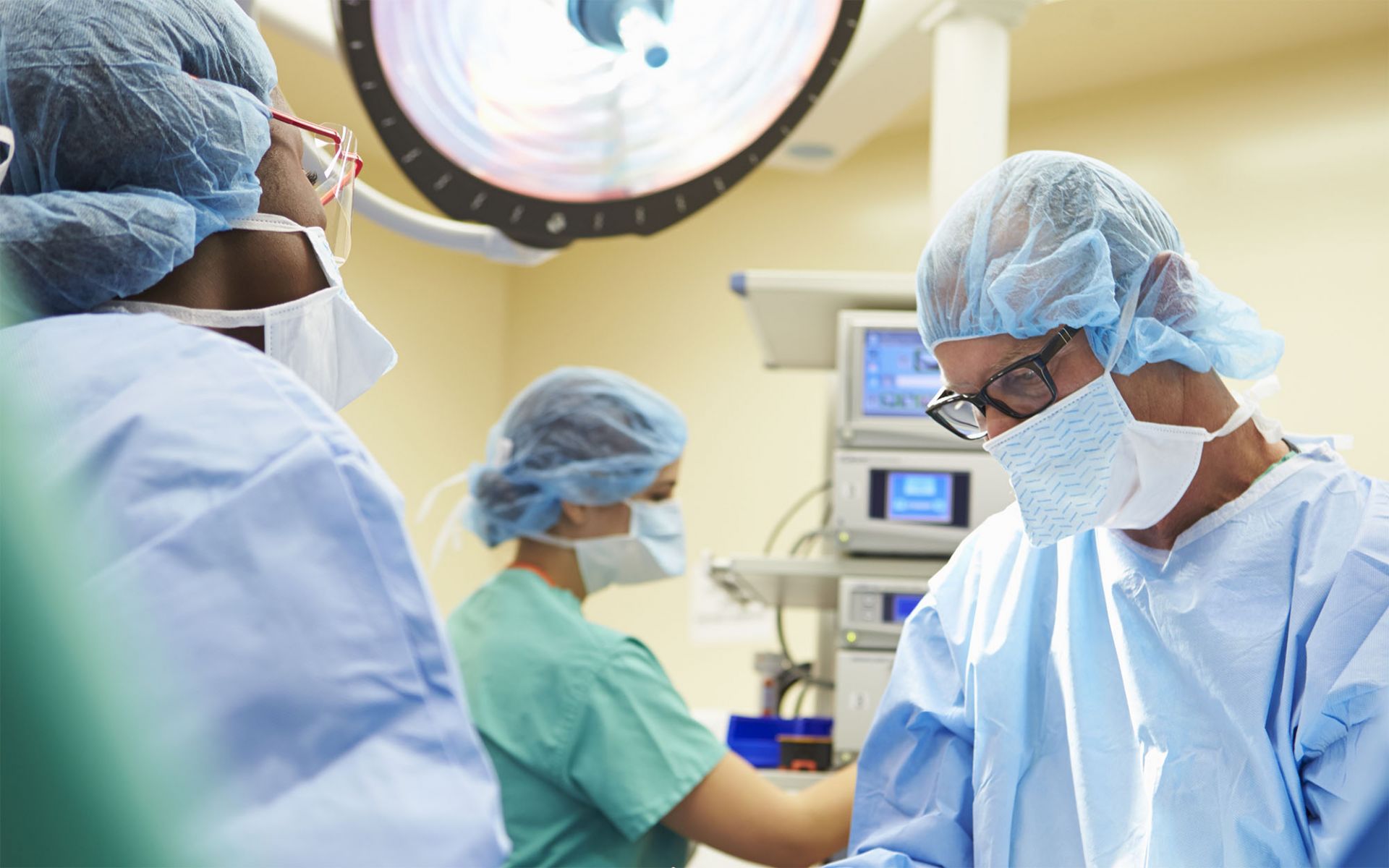 Mohs Surgery Introduction
Mohs micrographic surgery, a surgical treatment for skin cancer that offers a very high rate of cure, was developed by Frederick E. Mohs, MD, at the University of Wisconsin.

The technique of Mohs surgery is time-consuming and requires highly specialized training and personnel. You were referred to Skin Care Physicians of Georgia because we have the specialized training needed to perform Mohs micrographic surgery, and it has been proven to be a highly successful form of treatment for your type of skin cancer.

Why choose SCPOG for your Mohs Surgery?
Types of Skin Cancer

Squamous cell carcinoma is the second most common type of skin cancer. It is potentially more serious, and unlike basal cell carcinomas, since it has greater potential ability to spread to nearby lymph nodes and beyond.

Malignant melanoma is the third most common type of skin cancer. It typically begins as a dark or pigmented spot on the skin surface. When identified early and effectively treated, patients do very well. If it is not identified early, patients may struggle and may be very dangerous.

Exposure to the sun is the leading cause of skin cancer. The sun’s ultra-violet rays are main cause. For non-melanoma skin cancers (basal cell carcinoma and squamous cell carcinoma) it is an accumulation of sun exposure over decades. For malignant melanoma, sun exposures may be more limited but more intense often following a severe sunburn. More sun exposure especially during peak exposure hours of 10 AM to 3 PM; Additionally, artificial tanning in tanning beds is now clearly established as a risk for the development of skin cancer.

A patient’s skin type is also important. Those individuals with fair skin types, those who are more likely to burn and not tan are at higher risk

Although most skin growths are benign, any new growth on the skin or a sore that does not heal should be brought to your dermatologist’s attention.

Skin cancers may have many different appearances.

Basal cell carcinomas often appear as growths that are pearly or waxy in color, have a rolled edge, and sometimes having a dilated small capillary (blood vessel) present.

Squamous cell carcinomas may have more rapid growth, be somewhat tender or painful, have a pink appearance, and look like a small volcano.

Malignant melanomas are often pigmented in color and frequently described by ABCDE features. Asymmetry, Boarder irregularity, Color- a haphazard appearance where the dark color seems to spill over the surface instead of being uniform in a tan or brown color; Diameter- most melanomas are larger than 6mm (the diameter of a pencil eraser); Evolution- moles that change in appearance are potentially concerning for melanomas.

If your doctor the doctor thinks a skin growth is suspicious for a skin cancer, a biopsy may be performed. A skin biopsy is a procedure where a portion of the growth is removed and submitted to a skin pathologist (dermatopathologist) to evaluate under a microscope.

Fortunately, most skin cancers are successfully treated by several options including different surgical techniques and superficial radiation for selected non-melanoma skin cancers. Which treatment method is chosen depends upon several factors such as the skin cancer location, lesion size, aggressiveness of the growth pattern, whether the lesion has been previously treated, as well as other considerations such as immunosuppression. Mohs micrographic surgery uniformly produces the highest cure rates, especially for the most difficult tumors.

What You Should Know About Mohs Surgery

First and foremost, our Mohs surgeons are fellowship trained meaning they have dedicated an extra year of intense training to the Mohs surgery technique. The surgery is performed ONLY by physicians not physician assistants or nurse practitioners. Mohs micrographic surgery is a specialized technique for the total removal of skin cancers. The procedure is done in several steps:

In almost all cases, the surgery is performed in our office surgical suites. In those few cases where the skin cancer is extremely large or the patient can not tolerate local anesthesia, we are able to perform the procedure in the hospital under anesthesia where we have Operating Room privileges.

How to Prepare for Mohs Surgery

Patients should prepare for their Mohs Surgery in the following way:

The goal is to remove all of the skin cancer while preserving the greatest amount of healthy tissue. However, skin cancers can grow deeply and develop roots extending beyond the area that you actually see. As a result, the final size of the surgical incision will be determined by the extent of the tumor. However, you may require more before your skin cancer is completely removed. Fortunately, this can usually be done in the course of a single day. When surgery is completed, a decision will be made as to the way to manage your wound.

What to Expect on the Day of the Surgery

Shortly after your arrival, you will be taken to one of the treatment rooms, where you will be checked in the tumor location confirmed and you will have the opportunity to ask any questions about the planned procedure. The Mohs Procedure will then be performed as outline above. We take careful care to numb the skin with an almost painless technique.

The goal is to remove all of the skin cancer while preserving the greatest amount of healthy tissue.
Once the skin cancer has been completely removed, your doctor will discuss options on how best to repair the surgical wound. This may involve several options that will be reviewed in detail to determine what is the best option for you.

How Are Postoperative Wounds Managed?

Once it has been determined that your skin cancer has been completely removed, your doctor will discuss with your input how best to manage your wound.
The options will include:

What Should You Expect After Surgery?

After you are discharged from our office following your procedure, we recommend you go home , relax, and take it easy for the time discussed with you and your doctor.

It is likely that you may have some discomfort following surgery. Most patient’s discomfort can be successfully treated with Tylenol or mild pain analgesia prescribed by or physicians.

Other local findings that may occur following Mohs Surgery and having the wound closed with stitches or skin flap or graft include: bruising and swelling.

Should you experience any unanticipated events such as bleeding, call our office immediately at 478.742.2180. If after hours, you will be given specific instructions how to reach your doctor.

What to Expect After the Wound has Healed

You may experience some tightness, or drawing, as the wound heals. This is normal and usually lessens with time. Patients also commonly experience some itching after their wounds have healed. Rubbing a small amount of plain petroleum jelly on the scar often relieves this.

Frequently, tumors involve nerves, and it may take up to a year, or even two years, before normal feeling returns to an area. Sometimes the area remains numb permanently. Only time will tell. The scar tissue that grows over the wound contains many more blood vessels than the skin that was removed. This results in a red scar that may be sensitive to temperature changes. This sensitivity improves with time and the redness gradually fades.

Sometimes, the scar is unacceptable to the patient and the patient’s family. If this is the case, surgical scar revision may be considered. However, we usually advise patients to wait 12 months before having the scar revision performed. This is because the scar continues to improve in appearance and becomes less conspicuous up to one year after surgery.

There are several options to protect against future skin cancers and these include:

Once your surgery is over, periodic follow-up exams by your referring physician are important for at least five years. These visits can help with early detection and treatment of new skin cancers that may develop as well as the rare recurrence of the skin cancer that was treated. If you notice any suspicious areas on your skin between visits, it is best to check with your doctor to see if a biopsy is needed.

Helping you look better, not different.

We have used Skin Care Physicians for over 20 years. They are always kind and compassionate. We are grateful for their skilled treatment of our dermatological needs.